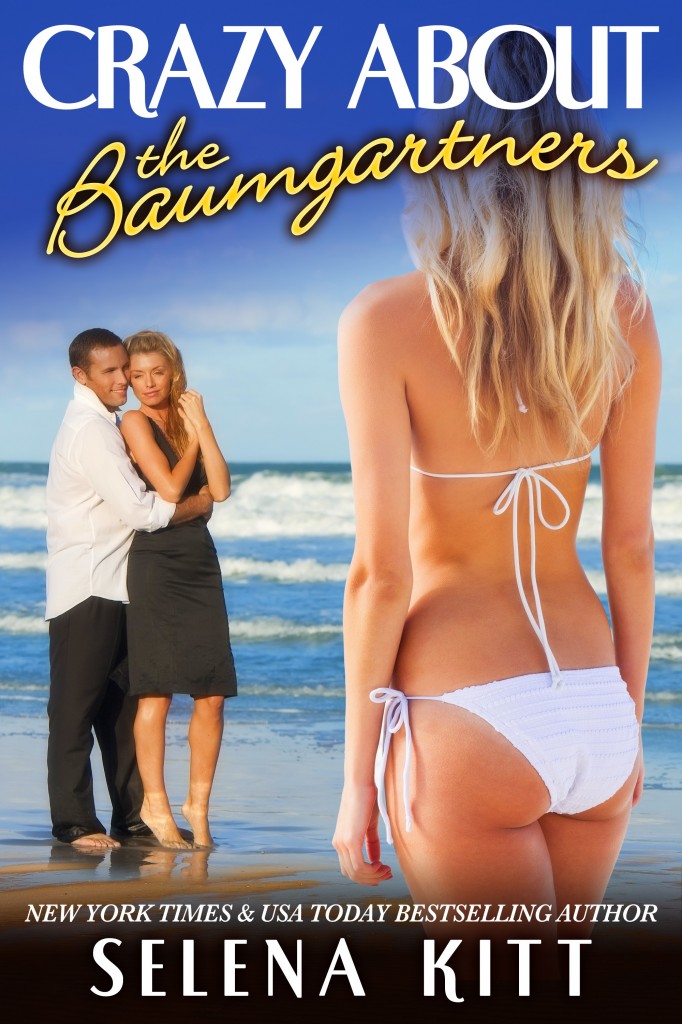 CRAZY ABOUT THE BAUMGARTNERS by Selena Kitt

Doc and Mrs. B have hired a new au pair and she’s crazy about the Baumgartners.

Poor rejected Gretchen, fired from her previous job and still licking her wounds from a recent breakup, is desperately seeking the kind of attention and affection only the Baumgartners can offer. So why do they seem to thwart her advances at every turn? It isn’t as if the polyamorous couple has been secretive about their fondness for threesomes.

Naughty Gretchen makes up her mind, on their annual trip to the steamy sun and fun of Key West, to show the Baumgartners just how crazy she is about the both of them.

I was loading dishes in the dishwasher when Doc came in. He opened the fridge and pulled out a beer. He popped the top off, tossing it onto the counter. I gave him a look, sweeping the top into my hand and putting it in the garbage under the sink. He came closer, watching as I bent over to put the last plate in the dishwasher.

“Damn, little Red Riding Hood, you make me feel like a wolf.”

I turned, finding him dangerously close. I could smell the alcohol on his breath and wondered just how many of those he’d had. Of course, he’d been here, all alone, with nothing to do but watch TV, drink beer and hand out candy.

“You’re looking rather wolfish,” I replied, glancing at the stubble on his cheeks. He’d clearly forgotten to shave that morning.

“All the better to tickle you with.” He grinned, grabbing my hips and rubbing his cheek against mine, making me squirm and laugh. I wondered if they could hear us in the family room. One of the kids could walk in at any minute—although I doubted it. They were likely too engrossed in candy negotiations.

I tried to push him away, my hands against his chest, but he didn’t budge. Doc was a big man and could take what he wanted, if he wanted to. The thought was blackly exciting. His hands remained on my hips, moving over the short skirt I was wearing.

“You’re so sexy in this damned costume,” he murmured, his denim clad thigh sliding between mine.

“I didn’t meant to tempt you, Mr. Wolf.” I cocked my head, giving him a smirk that told him that the opposite was true.

“Your wife picked it,” I reminded him.

“I know.” His hands moved down to my ass, squeezing. There was no pretense anymore about this being an accidental meeting. “Think she meant to tempt the wolf?”

“Do you?” I raised my eyebrows.

“You know I was watching, don’t you?” He leaned in to whisper this into my ear, his big hands gripping my ass, holding me to him.

“Yes,” I whispered back, my nipples hardening instantly at his words.

“Did you come hard?” He pulled my skirt up in back, hands roaming over my tights, making me gasp.

“I… I needed it so bad that night.” I whimpered. I needed to right now. Between his teasing grind against the counter before we left, and now this, I was ready to explode.

“I know.” The knowing in his voice undid me. My hands, which I’d previously kept at my side, went to his waist, feeling the solid heat of his muscles underneath that button-down dress shirt. “What were you thinking about when you came?”

“I… don’t remember,” I stammered when his hand reached around the front of my tights, cupping my mound through them, under my skirt.

“Liar.” He pulled back to look at me. His eyes were darker than I’d ever seen them. Dark with lust. “Don’t lie to me or Mr. Wolf will eat you all up.”

Was that supposed to be a threat? It just made me wetter.

“You.” I whispered. I was the desperately hungry one. “Both of you.”

“Fuck, that’s hot.” His fingers massaged me through my tights. My pussy lips were so swollen and fat. Everything down there was squishy. “I wish I could have seen you with the light on. Is your pussy shaved?”

I nodded. “But Mrs. B said I should let a little grow back. At the top.”

He groaned, palm grinding my pussy, his cock like a foot-long pipe against my thigh.

“And these gorgeous tits.” His other hand had found something to do, cupping my breast through my blouse. My hard nipple grew even harder, as if it could pop right out for his waiting fingers. “My God, Gretchen, do you know what you do to me? You turn me into a fucking animal.”

“I was just carrying my basket through the woods on the way to Grandma’s house, Mr. Wolf,” I teased, rocking my hips. He could get me off like this. Just like this. A fire burned through me at the thought. He could make me come in his arms while his wife and kids were just a room away and no one would ever know.

“You’re so damned tempting.” He smiled, watching my face as I looked at him through half-closed eyes while he rocked my pussy toward orgasm.