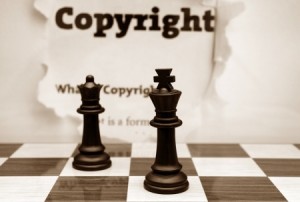 You are obviously confused about what plagiarism is and how copyright works. Since plagiarism and copyright are important to me, being a writer who spends hours creating the original material I publish and all, I thought I would educate you about the topic. The first place I would have thought you might look, plagiarizer, is to the internet standard, Wikipedia:

Plagiarism is the “wrongful appropriation” and “stealing and publication” of another author’‘s “language, thoughts, ideas, or expressions” and the representation of them as one’s own original work.

I can see where you might have become confused, plagiarizer. When the subject of plagiarism came up in school, I remember teachers saying, “Put it in your own words.” And that was the extent of their lesson. But there’s a problem with that phrase–put it in your own words–oft repeated by teachers and professors everywhere. It gives students, writers, and possibly future authors, the idea that putting something “in your own words” makes it yours. It doesn’t. Putting something in your own words allows you to express the idea without directly quoting the person who said it–but that doesn’t mean you don’t have to cite the work the idea came from. That’s the basis of research.

Plagiarizing fiction is a little different from plagiarizing an article or an essay. Two authors can take the same idea and write a completely different story. Let’s take the example one of the forum posters used in their response–that two authors are both writing about a small town girl who falls in love with a vampire. One is Twilight, the other is Vampire Diaries. They both have similar ideas–tropes–but they are very different in their expression, their characters, their happenings, even if they share some of the same vampire lore. Vampire Diaries didn’t plagiarism Twilight, or vice versa, no matter which came first. The authors simply used the same trope (girl in love with vampire, love triangles, etc) on which to base their fiction.

There is never, ever a time, when writing or publishing fiction, that it’s okay to use someone else’s work and “put it in your own words.” Let’s be clear about that. It is wrong to ever rewrite fiction and call it your own.

Apparently, plagiarizer,  you didn’t get the memo or you took your teacher’s word for it that “putting it in your own words” made it all okay. Aubrey Rose has come forward about this issue, but I personally know several other authors this has happened to who are afraid to come forward in fear of retaliation from the plagiarising author. And if the forum post above is any indication, it’s clear you believe you did nothing wrong. After all you said:

“I looked at a selling genre and wrote a book around them. I didn’t think it was going to be this severe. I didn’t copy anything. The story stayed in my memory and I had significantly altered it.”

Altering a work does not make it yours. You probably weren’t around back in 2008 when the Cassie Edwards extravaganza happened. She was a traditionally published author whose publisher dropped her because she plagiarised. And being banned from Amazon KDP or dropped from a publisher are the least of your worries when you plagiarize something, plagiarizer.

As to how severe the consequences may be, let me enlighten you, plagiarising author, about just how serious it is. While plagiarism isn’t technically illegal – you can turn in a completely plagiarised school assignment and not get arrested, although you’re likely to fail the course if you get caught, and maybe even kicked out of school, especially at the college level – plagiarism can also be a copyright violation. That’s where you can get yourself into trouble and pretty big trouble at that. And I’m not just talking about your book being removed from Amazon, or your account at Amazon being closed, and your IP and ISP address being blocked by Amazon. Obviously that’s bad enough–it really hits you where you live, when: “This is my only income-stream ATM!”

(Just an aside – I find it ironic you used the acronym ATM, which I assume you meant to indicate “at the moment,” because you are currently using other author’s hard work as your own personal ATM–automatic teller machine. Well, plagiarizer, your bank account has now been closed. And that’s not all that may happen to you. I’ll get more into that later.)

If you are taking someone else’s work and simply rephrasing it, as was the case with Aubrey Rose’s book (and quite a few others I’ve seen as well) – you are violating copoyright. There is a concept in intellectual property rights that you may not have been aware of, naive plagiarizer, called “substantial similarity.” Check this glossary of intellectual property terms for its definition. I’ll repeat it for you here. (Note I’ve cited the source… that’s how not to plagiarize, plagiarizer. I’ve bolded the most important phrase in the quote.)

I’m pretty sure, plagiarizer, even if you have not read this particular term, Amazon’s copyright lawyers have. And banning your account is the least of the actions that could be taken against you. Perhaps, plagiarizer, you aren’t as naive as you claim. Maybe you thought you would pick authors you assumed couldn’t pursue you with a lawsuit and decided to rewrite their popular works as your own in order to cash in on the gold rush of KDP self-publishing?

Did you think you wouldn’t get caught? That avid readers wouldn’t notice the similarities between your book and hers? Or did you just not care? You figured, if you got caught, you’d take the money and run?

Here’s the problem with your theory: a) you did get caught, and eventually, anyone who does this, will get caught–someone will find out and you will be exposed and b) you can still be sued. I don’t care what country you live in, how protected you feel you are, or how “innocent” this crime feels in your head.

You think the author you’re plagiarising has no recourse? But how do you know who that author is? I have more than one pen name, plagiarizer, and you could have chosen one of mine and not even know it. I have more than enough resources to come after you. And I would — on principle alone. As self-publishing becomes more lucrative, as more and more authors make money from their creative endeavors, they are branching out into other genres. Hugh Howey is currently writing a romance novel. He has more than enough money – and integrity – to come after you, plagiarizer. What if you plagiarise his pen name “by accident?” What if you plagiarise a traditional author who has branched out and self-published erotica or erotic romance? Anne Rice wrote her erotica under the name A.N. Roquelaure. What do you think would happen to you if you chose to plagiarize her, before anyone knew A.N. Roquelaure was Anne Rice?

Don’t think you’re protected, plagiarizer, that even if you’re found out, the author won’t come after you, because you could be wrong, and being wrong can be costly. Do you know what happens, plagiarizer, if you are sued and you lose?

You give up all profits from the plagiarised work. You pay back the profits, plus damages. The law says you have to pay up to $150,000 for each work infringed. You will also have to pay the author’s attorney fees and court costs. That’s right, plagiarizer–the author won’t have to pay to sue you, in the end. You will pay to be sued. The court can also issue an injunction against you or even send you to jail.

Was it worth it, plagiarizer?

Authors if this has happened to you, check out this resource: Author United Against Plagiarism. The more authors united against this – and the more authors reporting it – the worse it will get for plagiarizers who believe they can continue to do this and get away with it.

EDITED TO ADD: Plagiarists, THERE ARE AND WILL BE CONSEQUENCES for your actions.

If you are plagiarizing someone else’s work, I would suggest you re-think your “publishing strategy!”