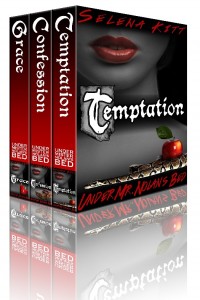 GET THE ENTIRE NOLAN TRILOGY

Get ALL THREE Under Mr. Nolan’s Bed books in the trilogy for one LOW PRICE!

Nearly HALF OFF the list price of all three books!

This edgy, page-turning saga isn’t just a trilogy, it’s an enthralling reading experience, a non-stop roller coaster ride of emotion that will keep you on the edge of your seat, giving you cliffhanger after cliffhanger until the final, jaw-dropping climax.

You will be on pins and needles as Selena Kitt plays cat and mouse with you, the reader. You’ll find yourself asking—am I reading a romance? A coming-of-age tale of sexual awakening in the Puritanical, repressed late 1950’s? A commentary on power and corruption in the Catholic Church?

Yes, yes, and yes! The mystery and secrets revealed in this new Selena Kitt Classic will have you praying for forgiveness before it’s all over, but in the end, will restore your faith in the triumph of the human spirit and the overwhelming power of love.

TEMPTATION
By Selena Kitt
“Lead us not into temptation…” ~Matthew 6:13

What happens when you fall in love with your best friend’s father?

Leah is a good, Catholic girl, and she and Erica have been best friends since their first communion. Sure, Erica’s father is handsome and charming, but Leah spends so much time at the Nolan’s—just Erica and her famous, photographer father now, since Erica’s mother died—that she’s practically part of the family.

Both girls have led privileged, sheltered lives and are on the “good girl” track at St. Mary Magdalene’s Preparatory College, Leah pursuing her love of dance and Erica sating her endless curiosity as editor of the newspaper. Neither of them could have ever imagined that one fateful discovery will not only push the boundaries of their strict, repressive upbringing, but the bonds of their friendship as well.

If you read the original Under Mr. Nolan’s Bed, you will find this retelling a richer experience with deeper secrets to reveal.

CONFESSION
By Selena Kitt
“With the mouth, confession is made into salvation…” ~ Romans 10:10.

The shocking discovery best friends Leah and Erica have made under Mr. Nolan’s bed has them down the wicked path of temptation, both girls veering far from the narrow path dictated by their strict Catholic upbringing, and their sexual transgressions have had unintended consequences.

Erica finds her life turned upside down when Leah falls for Erica’s father, but just as Erica is beginning to accept their love for each other, Leah disappears. Bewildered and abandoned, Erica and Mr. Nolan are faced with sadness and confusion at their loss, but while Mr. Nolan spirals into mourning, Erica is determined to find her friend.

Erica can’t possibly know why Leah has vanished, but when she enlists the help of Father Michael, her search and the real reason for Leah’s disappearance intersect to uncover a multitude of shocking confessions and a secret that will shake not only the foundation of their faith, but the entire institution of the Catholic Church itself.

GRACE
By Selena Kitt
“By Grace you have been saved…” Ephesians 2:8

Childhood friends Leah and Erica have been sacrificial lambs at the altar of a scandalous corruption within the Catholic Church, violated by those who have, in their lust for power, turned the sacred profane.

The mystery of Leah’s disappearance results in a long-awaited reunion, but it is tainted by both their loss of innocence and a deep, unfathomable sorrow, which only leads to more secrets that have yet to be uncovered.

The revelations Erica and Father Michael have already exposed in their search to find the truth have only scratched the surface of the mystery they are about to unravel.

But will their discovery serve to save them and redeem the innocence they have lost, or will the sins of the fathers prove to be too powerful and destroy them all?

Her memory of those photographs, those titillating pictures, and the rush of feeling it created in her, made her chest burn and her limbs sing. She danced with the memories, she danced the sin and shame of her own lust, the final acquiescence to her body’s need, and the sweet triumph of reaching that peak. The dance was hers now, no longer anything she had learned. It was the pure expression of her essence, every feeling and thought that had been running through her head on some endless loop.

When she finally collapsed in a heap in the middle of the floor, breathless and panting, she felt like crying, as if her body had been filled to bursting and it must now have some sort of deliverance. The dance she had hoped would exhaust and deplete her had simply served to energize her further. Leah lifted her head, opening her eyes slowly, and saw him standing there in the shadows, like a dream.

Her heart fluttered to her throat like a trapped butterfly and her hand leapt there, as if she could catch it. He was watching her, just outside of the circle of lamplight, leaning against one of the tall supports she and Erica used to dance around that ran floor to ceiling throughout the warehouse.

She heard the click of his throat as he swallowed dryly. “You’re so beautiful.”
The look on his face was the one straight from her imagination, like he worshipped her, and at the same time, like the big bad wolf accosting an innocent red riding hood, like he wanted to eat her all up.

“I didn’t mean to wake you.” Her voice was barely a whisper. “I just… couldn’t sleep…”

She was stunned to silence, lips parted with words she couldn’t speak, staring at him as he took a step toward her, the light on his face now, a wolfish look in his eyes making her skin bristle all over. She had never heard Mr. Nolan swear before. Ever.

“Leah…” Her name on his lips was like a caress. His gaze moved over her, no tights, no leg warmers, no toe shoes. He’d seen her like this a hundred times of course, but she had never felt so naked. The look on his face changed when he met her wide eyes. She saw the emotions cross his features, from horror and shame to something like anger. “Jesus. Go to bed.”